Well, folks, I’m just back from the West Indies island of Trinidad and wow what a story to tell. Port of Spain is the capital of Trinidad and Tobago located on the west side of the island just seven miles off the coast of Venezuela. Trinidad is the larger of the two islands, and its size is 1,768 sq miles, or 4,768 KM2 it is the furthest island south in the Caribbean link, Tobago is the smaller island of the two that is only 115 sq miles, big difference.They say most of the fun happens on Tobago, but I would beg to differ!

I had the pleasure of visiting Trinidad in June and July of this summer.I flew into Port of Spain from Miami and upon arrival was immediately greeted by my host Captain Ronnie Ramnanan and his sister Brenda Williams, true Trinis. Although Brenda has since moved on to England, among other countries, she still considers Trinidad her home.

After being greeted at the airport we were waiting for one more plane to arrive carrying some friends coming from Germany. Wolfgang and Tanya represent Matlures from WWW.MATLURES.COM. After their arrival, we all got in Captain Ronnie’s Truck, and the fun began. Here is a little background on this beautiful piece of the pie in the Caribbean

Although the official language of Trinidad is English, there are many different slangs from Creole and slang from potwa which is a mix, when a Trinidad person talks to you pay attention because it is fast, and you can quickly answer to the wrong thing.It was interesting to find out that the original Trinidadians were Indians whose ancestors came from South Asia and were called Indo-Trinidadians or Indian Trinidadians and Tobagonians.

Today the island of Trinidad is made up of many different cultures:
37.6% Indian
36.3% African
24% mixed
7.66% Dougla ( Indian And African )
Europeans .11%
Indigenous Amerindian, Arab
17% other
6.22% undeclared
So it is a real culture within a culture. Here are the religious breakdowns:
49% of the island is Christian
18% of the island is Hindu
5% Muslim
.7 % spiritual Baptist
.3 % Rastafarian and a few more splinter religions.

So with all that culture from all over the world ending up on a jungle island, you officially have an incredible place to eat food. The Trinis love to cook, and they love to cook with heat. One of their spices is a pepper called the Scorpion Pepper. It is hotter than a ghost pepper if any of you know what that is. So set back and listen to all of the cuisine I experienced while in Trinidad.

Day one we stopped at Cap. Ronnie’s and his lovely wife Lisa made us dinner. Swordfish, and tuna with some Roti, which is like a staple bread dough. Curry, garlic, and, lemon. All in all, it was a great starter meal after a long airplane ride. After dinner, we moved up the mountain to our piece of heaven on 100 acres. Only eight homes on it and we were the only people on the mountain at the time except for the caretakers ( Sheldon ) and Crash. When we finally arrived at our house in the jungle, we were captivated by our view overlooking a 1000 ft drop off into the Atlantic ocean. You could also see the town of Mayara below. That’s where Captain Ronnie Lives. We settled on the first night and got some rest because the next day was my birthday.

On June 28, I woke up to paradise for breakfast. The fruit was picked off the trees just outside, the chicken eggs are freshly gathered, and the smell of curry is already lingering. I rolled out of bed to some new smells coming from the kitchen. Breakfast was on and Capt. Ronnie was back with lots of goodies. Like TTs we had to exchange dollars for TTs so we could get around. TTs are the local currency of the country. He had also brought along fresh food from the sea.

The showers were all rainwater (NO HOT WATER HEATERS) but to tell the truth, it was so tropical out I never knew the difference. In fact, it was a refreshing experience every day and sometimes at night. Showering in pure rainwater is fantastic.

The next day Saturday was the day that we met Gram Scot, the owner of all the land. His family owns all the juice businesses in the island and the bottling company. This day, Gram Scott was going to throw his annual party for the local captains and mates and have their version of the blessing of the fleet for all the local fishermen and crew. Around 10:00 AM the folks started arriving to start early cooking pots and cook all day and night. It was terrific, and I felt like I was having my own little cook-off on the property. There was iguana, mutton, possum, a whole pig, jerk chicken, oxtail soup, curry chicken, homemade shrimp fried rice from scratch and fresh seafood, Roti Avocados from the trees on the property, star fruit, fresh pineapple, local greens.

We cooked until the night came and had all kinds of left over’s and the cold drinks to fill all the fishermen’s coolers. We also enjoyed lots of cold beverages. What a fantastic day it was meeting all those locals and sharing stories. I handed many cards out, hoping to get a call back for more work down there. The food is the best. That’s was the party for the blessing of the fleet. We even ate street food in the village of Mayara. We ate doubles, a hand food made with chickpeas and a beef pie of sorts. I can’t remember the name, but I ate them a few times they were so good. Try the Doubles for sure.

In the next few days, we were doing all kinds of things around the island. Going to Harry’s water park was one of them. Visiting an abandoned lighthouse, the cliffs, and went to the town of Toco to took photos, We had three cars following each other on the left-hand side of the road on very mountainous roads and encountered two roadblocks ask for license, etc. I didn’t have my passport on me and was told to carry it from now on. Yikes.

The night before I departed, Captain Ronnie was kind enough to cook ( surprise)! It was one hell of a going away meal. Ronnie brought up from the sea a dozen huge lobsters and Tuna steaks with some salad. We ate like kings.

I hated to leave. If your ever in the Caribbean and you want some Caribbean Indian soul food with a kick then Trinidad is your stop, I have been through the Caribbean before on yacht deliveries even as far down as Venezuela. I have also been as close as Granada but never made it to Trinidad. Before I left, I was able to go over to Port of Spain to the TT YACHT CLUB and meet up with Gram Scott to take his 50 Bertram out and around the islands in between Venezuela and Trinidad. We could see the mountains of Venezuela just s5 miles away. The waters were breathtaking, and I took lots of photos. After the boat ride and a swim at one of Grams weekend houses, we headed back to Port of Spain to the yacht club.

We then journeyed back across the mountain to Mayara, a two and a half hour drive away.Not only was I driving with a STEERING WHEEL ON THE RIGHT SIDE AND DRIVE CAR ON THE LEFT SIDE OF ROAD, NOW it was GOING TO BE DARK THE WHOLE WAY BACK. On this drive is when I went through the second roadblock. Yikes, I still had no passport on me! Luckily Ronnie just said all three cars are together, and just checked my license, and away we went, never happier to see my bed that night. The next day I prepared to depart Trinidad with a lot of great memories and photos, and above all, I met a hand full of new friends and many contacts. I recommend going if you have never been, be careful and read your state department travel advisories if sailing there or going by plane. 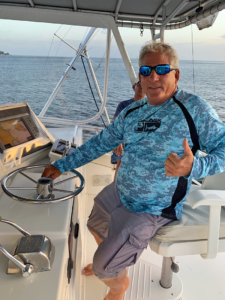 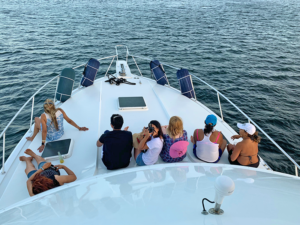 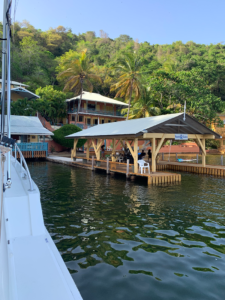 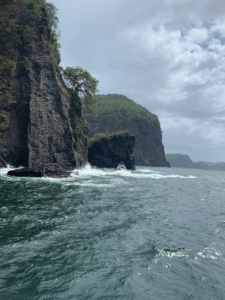 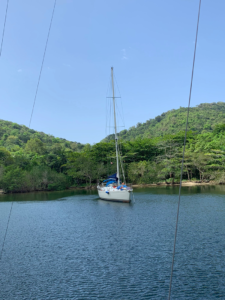